The Finnish Nature Centre Haltia’s corporate social responsibility includes three areas: ecological, social and cultural responsibility. The exhibitions, guided tours, nature school days and events at Haltia support the creation and strengthening of a relationship with nature, and taking responsibility for the environment. Haltia is committed to sustainable development in all operations. Haltia’s sustainable development team meets on a regular basis. In 2015, the Finnish Nature Centre Haltia was presented the Special Commendation for Sustainability in the prestigious European Museum of the Year competition.

From the very beginning of the planning phase, the aim was to create the most ecological building possible, thus contributing to the realization of climate objectives. Haltia is built from wood. The architectural choices for the building, such as the north wall without windows and the placement of the house on the plot, minimize heat loss and, on the other hand, take advantage of the possibilities offered by the points of compass, such as the use of ample natural light through the floor-to-ceiling windows on the southern wall. The building is heated and cooled mainly with the heat and cool of the rock face. The building is almost 100% self-sufficient in cooling and about 75% in heating. The remaining heating is covered by purchased electricity produced from renewable energy sources. Haltia also has solar panels that generate electricity from solar energy for use in Haltia. Similarly, for example, the braking energy of the elevator is recovered as electricity and utilized in Haltia. Haltia has many technologically advanced energy-saving solutions. The lights in the rooms turn on and off automatically when someone enters or leaves the room, and turn dimmer or brighter depending on the amount of light coming in from outside. Haltia’s active, self-regulating air conditioning system responds to the number of people in the building and enables the monitoring and adjustment of indoor air quality. Automatic taps and no-water urinals reduce water consumption. Domestic water is heated from spring to fall mainly with energy from solar collectors and in winter, with heat derived from the bedrock. Haltia uses plenty of high-quality multimedia in exhibitions. The projector and display systems for the multimedia features are long-lasting, consume as little energy as possible and have a high degree of recyclability. The devices have a power saving mode, their brightness changes automatically according to the degree of light in the surroundings, and they have a carbon footprint calculator that monitors energy consumption. 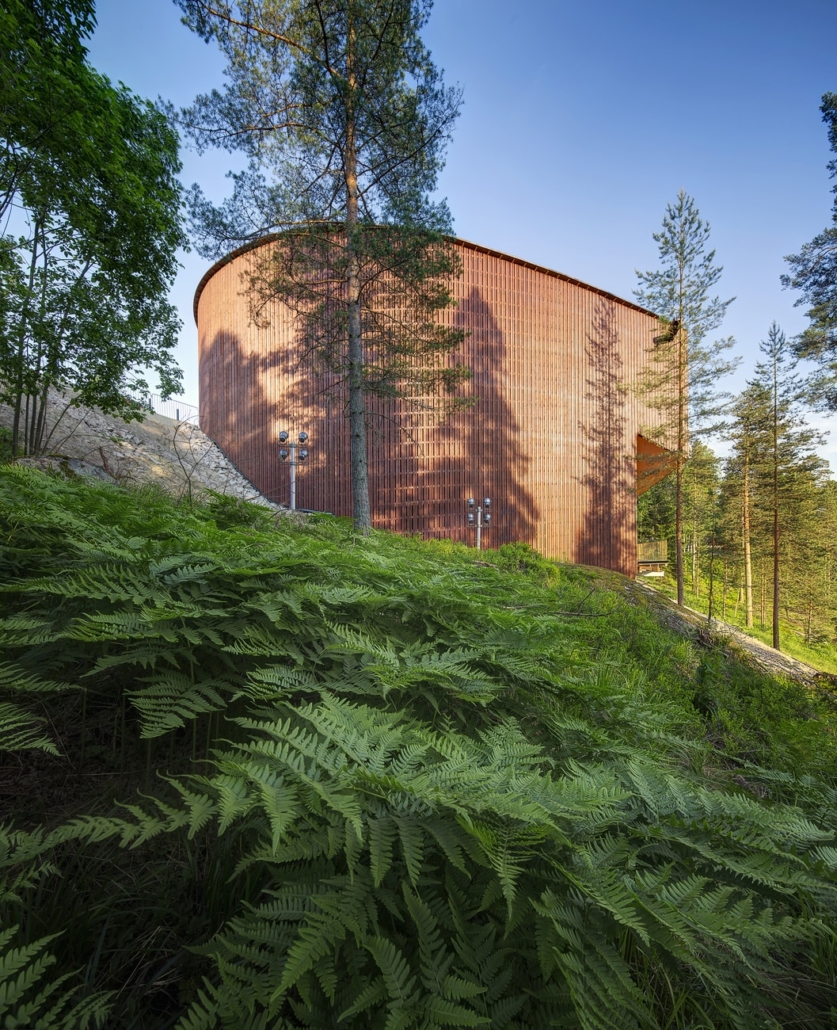 Considering nature at all times

Haltia’s services are built with consideration for nature. The trails near Haltia are planned taking into account the local nature values. The service structures of the trails have been made to last long and have low lifecycle costs. Maintenance is arranged so as to put as little strain on local nature as possible. Visitors are given tips to protect nature and promote litter-free hiking.

In restaurant Haltia, the excess heat from kitchen appliances is recovered and efficiently exploited. The food served in the restaurant is mainly of Finnish origin, local production is favored when choosing the ingredients, and the aim is to use organic produce as much as possible. The restaurant uses only responsibly caught fish, vegetarian food is served daily and most of the waste, if any, is utilized. Restaurant Haltia holds the EcoCompass certificate. Sustainable and eco-labelled products are favored in all procurement for Haltia. The products for Haltia Shop are selected carefully to support the strengthening of the relationship with nature. Waste is efficiently sorted and recycled in the building. Haltia advises both employees and visitors to sort waste appropriately. Haltia is accessible  by public transport and visitors are encouraged to use it in connection with events as well. We inform about the public transport connections particularly in our social media channels.

Social responsibility: Exercise and moving about in nature increases well-being

Geothermal heat, solar collectors, a grass-decked roof, self-adjusting air conditioning and lighting – the environment has been taken into account in every aspect of Haltia. The eco-friendly functioning of the nature center is based on expert design and the latest state-of-the-art, modern ecological solutions. Haltia was designed and built according to the principles of sustainable construction, with the objective of minimizing the carbon footprint. Environmental aspects are taken into account in Haltia’s operations.

Eco-friendliness begins with the architecture…

Haltia is designed to require as little energy as possible for heating, cooling and lighting. The rounded shape of the building makes its exterior surface area very small in relation to its cubic volume, and the lowest floor is completely underground. This helps minimize heat loss. The terrace has been positioned to cast a shadow over the lower levels, which reduces the need for cooling in summer. The small number of windows further reduces not only the need for cooling, but also heat loss. The points of compass and the 24-hour cycle have also been taken into account in Haltia’s design. This enables nature to help in providing efficient and eco-friendly heating and lighting.

… and is complemented by advanced technology

Haltia is equipped with state-of-the-art technology to facilitate efficient, eco-friendly operations. Long service life and recyclability of equipment were taken into account when technology was selected. Moreover, it was a prerequisite at the tendering phase that in order to qualify for selection, Haltia’s suppliers must meet certain environmental requirements in their operations. In Haltia, the HVAC technology, electrotechnology, fire extinguishing and security systems, presentation technology and the information system in the entire building are designed to be as compatible with each other, and as eco-efficient as possible.

EMYA award to Haltia for sustainability

In spring 2015, the Finnish Nature Centre Haltia was the first in the world to receive a Special Commendation for Sustainability in the prestigious European Museum of the Year competition. 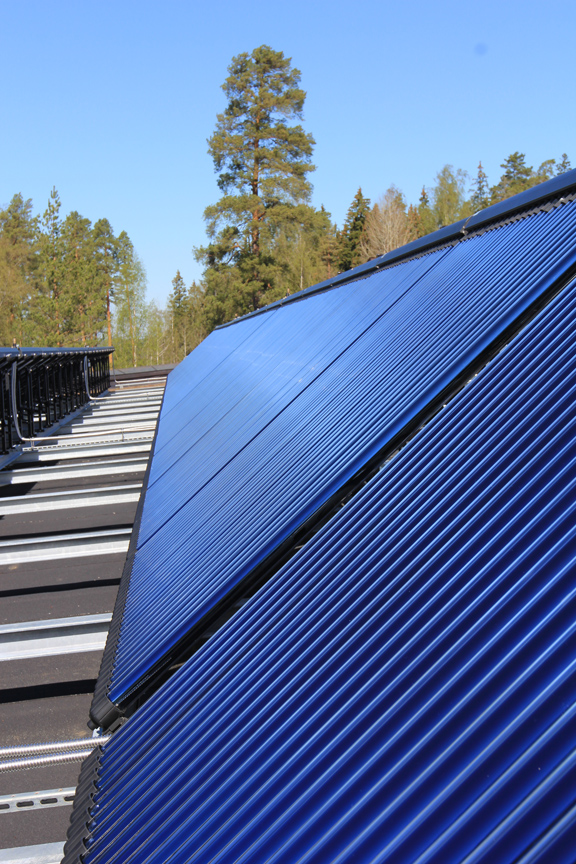 In Haltia, the heat is removed from indoor air using fan convectors and chilled beams in which cool water circulates. When removing the excess heat from the building, the cool water gets warmer. The heat transferred into the water is returned to the building’s geothermal heating system and via the geothermal heating pipes back into the bedrock. After the winter heating period, the temperature of the bedrock is slightly below normal. As the warm geothermal fluid is circulated from Haltia to the bedrock, the fluid cools down, giving out heat, and returns into the building cooled. At the same time, the bedrock gets slightly warmer.

Energy for Haltia’s heating system is also collected by the solar collectors on the roof of the building. The functioning of the so-called evacuated tube collectors is based on the rays of the sun being reflected through a vacuum on a black surface, heating it, and the heat carrier inside the collector. The vacuum retains the heat in the tube, as the surrounding air cannot cool it. The heat carrier heats the frost-resistant solution that circulates from the solar collectors into Haltia’s heating system. The heated solution is used together with geothermal heat to heat the water for the supply air devices, radiators and underfloor heating circuits as well as the domestic water used at Haltia. When the solar collectors provide more heat than currently needed, excess solar heat can be transferred into the bedrock in the geothermal fluid. This also prevents the solar collectors from overheating. The aim is that the hybrid energy from the bedrock and sun will facilitate only 25% of the heating energy at Haltia to be sourced from mains electricity in the future. The electricity used at Haltia is eco-labelled ecoenergy.

Waste heat generated by the refrigeration equipment and other equipment in Haltia is recovered. Depending on the time of the year, and the need, it is used to provide heat by heating the supply air for the ventilation or stored in the bedrock.

Automatic taps and no-water urinals reduce water consumption. In the summer, domestic water is heated mainly with energy from solar collectors and in winter, with geothermal energy.

Air conditioning responds to the number of people

Haltia’s facilities can be adapted to a wide variety of uses, and similar adaptability has been the goal of electrotechnological solutions. The consumption of electricity is lowered by the geothermal heating system that significantly reduces the amount of electricity needed for heating and cooling. The aim for the future is for Haltia to be as energy self-sufficient as possible due to the geothermal and solar energy solutions used. If mains electricity is needed to supplement the energy consumption, electricity produced from renewable energy sources is purchased for the building.

Most of the electricity in Haltia is consumed by lighting and presentation technology. The building is designed so that natural light from the windows can be used as much as possible, for example in the lobby and the restaurant. In contrast, natural light is prevented from entering the exhibition facilities in order to minimize the power requirement of the lighting system. LED lights are used in the outdoor lighting at Haltia. Motion detection and presence detection reduce the power consumption of indoor lighting. Motion detection is used for example in the auxiliary rooms, toilets and corridors. When there is no movement in the corridors, lighting is dimmed to about 10 per cent of the standard level, and returned to normal when necessary. It is not advisable to turn off the fluorescent lamps completely, as that would shorten their service life. Dimming reduces electricity consumption and extends the lamps’ lifecycle. The lighting at staff workstations is controlled by presence detection, which is more accurate than motion detection and even recognizes the movement of fingers on a computer keyboard. Energy-saving equipment has been selected for the exhibitions at Haltia. The centralized, remotely controlled exhibition control technology enables the control and switching off of all exhibition equipment when not in use.

One elevator serves the entire building. The elevator’s braking energy is recovered into the building’s electrical network for immediate use as needed. The energy recovered from the elevator could be used to run three washing machines full of laundry machines every day, all year round.

Sunlight from the socket

In the future, after further advances in technology, the aim is to build solar panels that produce solar energy to be converted for use in the power grid. The solar panels will further increase Haltia’s energy self-sufficiency.

Because Haltia is built of wood, a backup system secures the operation of its extinguishing system in case of power outages. A diesel-powered backup generator ensures the functioning of the fire extinguishing system in the event of a fire. However, the backup generator does not stand idle at other times, either, as it can be used to supply electricity into the building’s network during so-called normal power outages, that is, when there is no fire. That is why Haltia’s operations can continue almost as usual even during power outages: after a 15-second delay, the backup generator starts running to provide power for the lights, exhibition technology and other functions in the building to almost 100 percent.