The Crane Whisperer – pictures by Tapio Tuomela on a crane farm

Cranes never forget. The released birds cry out a greeting to their caretaker upon returning for a visit.

Known as the “crane whisperer”, Jouko Alhainen has cared for dozens of injured or orphaned cranes on his farm. Some of these were able to return to nature. Unable to fly, a crane named Kookka has been in Jouko’s care since 1993. A crane whisperer can read cranes and their sounds, gestures and expressions like an open book. The birds can communicate not only happiness and sadness, but also when they are hungry, bored or frustrated. Jouko has seen how cranes can grieve the loss of a mate or chicks for weeks.

He developed an interest in nature and nature conservation as a child, building his first birdwatching tower on the shore of his home lake so he could get a better look at the local bird life. Since then, he has built and designed birdwatching towers all over Finland, from Hanko to Inari.

In 2019, the Finnish Cultural Foundation Häme Regional Fund presented Jouko with an award for his life’s work. The award was presented for the protection and study of birds as well as, in particular, his respect for nature.

Jokioinen-based photojournalist and nature photographer Tapio Tuomela has won awards in several Finnish Nature Photo of the Year competitions. He has known Jouko Alhainen for decades and joined him for numerous birdwatching excursions.

The new photography exhibition at Haltia Galleria show the goings-on at the crane convalescent farm in Humppila over the past couple of years Tapio also took the photographs for Riitta Saarinen’s book Kurkikuiskaaja (Crane Whisperer), which was published in August 2022.

Don’t forget that you can visit all exhibitions at Haltia free of charge if you have a Museum Card! Read more about the Museum Card 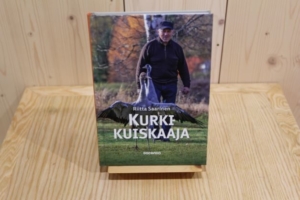