British photographer Levon Biss’s pictures in the Microsculpture exhibition bring the insect specimens of the Oxford University Museum of Natural History to a whole new light. The enormous size and precision of the works reveal even the smallest details of insects that would otherwise be invisible to the human eye. The name of the exhibition “Microsculpture” means fine structures on the surface of insects.

In 2016, Levon’s passion for nature and photography came together to create the award winning Microsculpture-project, a unique photographic study of insects in mind-blowing magnification that took the genre of macro photography to an entirely new level. Levon adapted traditional techniques to create a photographic process that revealed the minute details of insects in a resolution never seen before. It has been described as a “beautiful marriage between art and science”.

Microsculpture-exhibitions display his subjects in large-scale formats, with insects only a few millimeters long being presented as 3 metre high prints. Each image takes 3 weeks to create and the final artworks are produced from up to 10,000 individual photographs. His exhibitions continually travel the globe, allowing diverse audiences to engage with nature in entertaining and educational way.

During the last five years, the Misrosculpture-project has been exhibited in Europe, the Middle East, South America and the United States, and exhibitions presenting it have been organized in a total of 23 countries.

Entry is included in the price of Haltia’s exhibition ticket.
Don’t forget that you can visit all exhibitions at Haltia free of charge if you have a Museum Card!

Levon Biss is a British photographer born in London. Throughout his career Levon’s work has covered a wide range of photographic genres, but he is best known for his unique macro photography. His large scale photographs are regularly exhibited around the world and his prints are housed in numerous museum and private collections. His photos have been featured in publications, like TIME- and The New York Times as magazine covers. His photography on insects in currently used in numerous school curriculums around the globe to educate and inspire future generations on the wonders of nature.

In 2020 Levon Biss turned his attention to botany with The Hidden Beauty of Seeds & Fruits a photographic study of the carpology collection at the Royal Botanic Garden Edinburgh. His most recent exhibition Extinct & Endangered was released in 2022 and is currently on display at the American Museum of Natural History in New York. 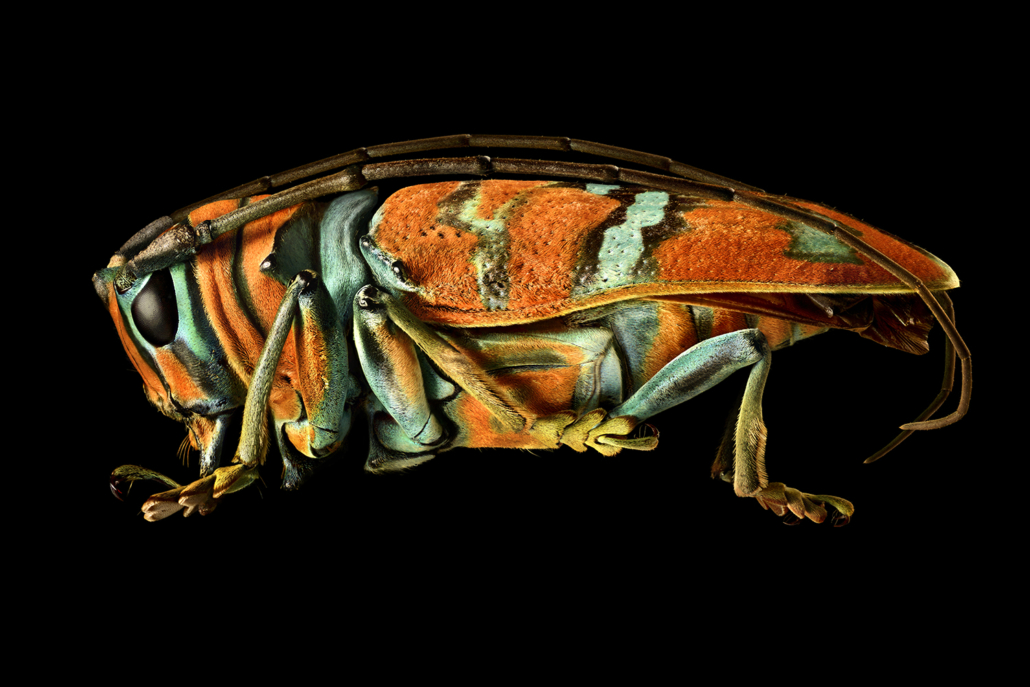 In terms of numbers of species, insects form the largest class in the Arthropod phylum – both globally and in Finland. More than 900,000 insect species have been identified, but estimates of the actual number range between 2 million and 30 million species. Other types of arthropod are the entognathans, arachnids, crustaceans, and myriapods. The most important characteristics of insects are a body that consists of a head, thorax and abdomen. They have three pairs of legs located on the thorax. Insect larvae can also have several pairs of false legs on their abdomen. As adults, many insects have two sets of wings.

We see insects in all types of habitats and they use almost anything as food: living and dead plants, animals and mushrooms as well as manure, blood and other bodily secretions.

Metamorphosis in insects can occur in three forms: little or none (for example, silverfish, firebrats), gradual (true bugs) or complete (butterflies and beetles). The majority of insects belong to orders that undergo complete metamosphosis. As is the case with all arthropods, insects have to moult – or shed their skin – as they grow. The number of times an insect moults during the larva stage varies greatly between different species.

The importance of insects to biodiversity cannot be overemphasised. They hunt other insects and are prey for many organisms, they pollinate plants, improve the soil, and recycle nutrients. These services are also extremely important for people. Without them, the conditions for humans to live on this planet would be much poorer.